Our Christmas Experience is live! Click here to book.

The Annie McLeod Experience will be unavailable on the 25th of November as we transition to our Christmas Ride. Tickets will be 25% off.

The founders of New Lanark were David Dale, a Glasgow banker and entrepreneur, and Richard Arkwright, the inventor and pioneer of industrial cotton spinning. Their partnership dissolved after only a year but Dale continued to run new Lanark for another 15 years, establishing a philanthropic tradition which was further developed by subsequent owners. 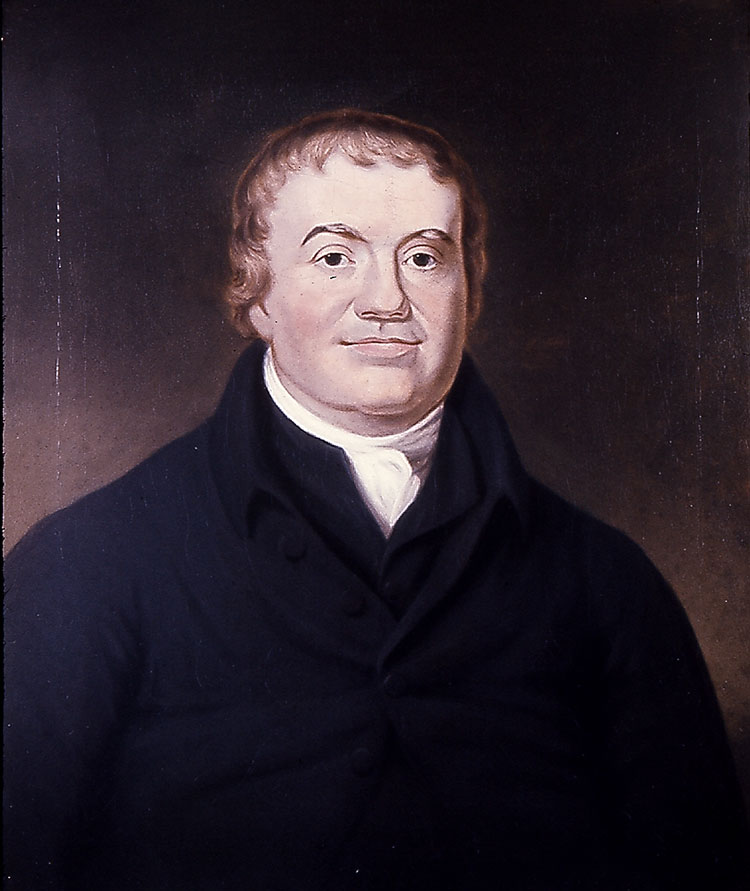 Dale was born on 6th January, 1739, the son of William Dale, a poor grocer from Stewarton in Ayrshire, and his wife Anne. Dale served as a weaver's apprentice in Paisley and from there, aged 24, moved to Glasgow where he set up as a textile merchant. This proved a lucrative market to enter and 20 years of ensuing prosperity, including becoming a burgher of Glasgow and a member of the Merchant Guild and Trades House, culminated in Dale’s appointment as the first Glasgow agent for the Royal Bank. Dale also became interested in manufacturing and in the space of three years, set up a Turkey-red dyeworks at Dalmarnock and cotton mills in Catrine, Blantyre and, of course, New Lanark. Dale was active in the foundation of the Glasgow Chamber of Commerce and was elected a magistrate of the city of Glasgow in 1791 and 1794. 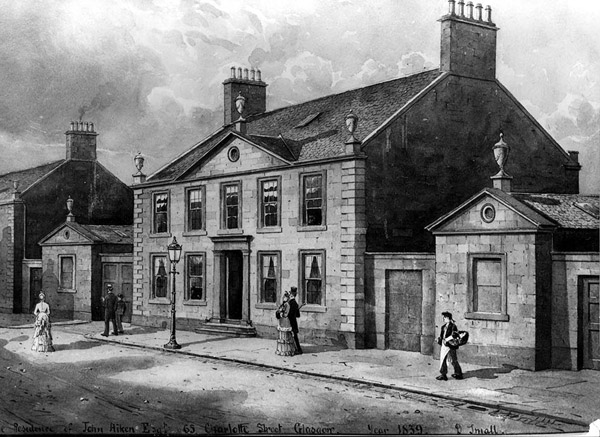 During his time in Glasgow, Dale acquired a well-connected wife, Anne Carolina Campbell, the daughter of John Campbell, an Edinburgh Director of the Royal Bank. Dale and Anne purchased a house in Charlotte Street, Glasgow- designed by Robert Adam, one of the best known architects of the day- and had at least six children: Anne Caroline- who went on to marry Robert Owen, William, Jean Maxwell, Margaret, Mary and Julia Johnston. 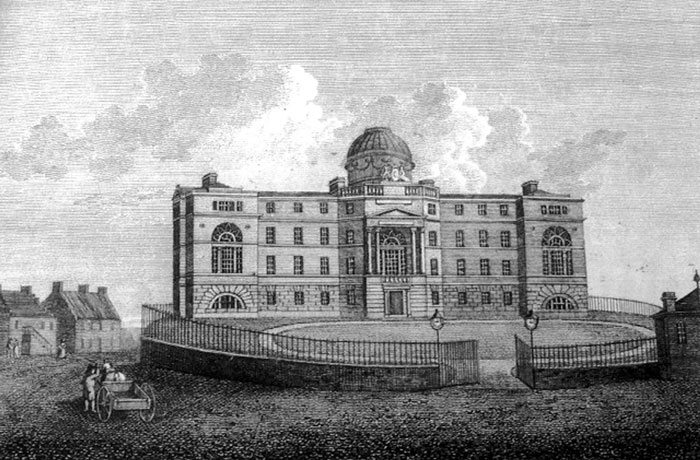 Looking at his business interests, there can be no doubt that David Dale was a rich man, but he was also deeply religious, with a concern for philanthropy, education and the welfare of his workers. In the 1760s, in protest at the system of ecclesiastical partonage, he left the Church of Scotland and became a founder member of the strongly missionary Old Scotch Independent church. Dale also provided philanthropic support to various causes, including the British and Foreign Bible Society, the Town Hospital, the Royal Infirmary, Bridewell prisoners, Calton charity school, the Andersonian Institution and the Humane Society.

Concerned at the volume of emigration form Scotland, much of which was linked to the Highland Clearances, Dale established cotton mills in places as far apart as Oban, Stanley in Perthshire and Spinningdale in Sutherland. Spinningdale, the most conspicuously philanthropic of these ventures, was established with the specific intention to create industry, wealth and employment in the Highlands. 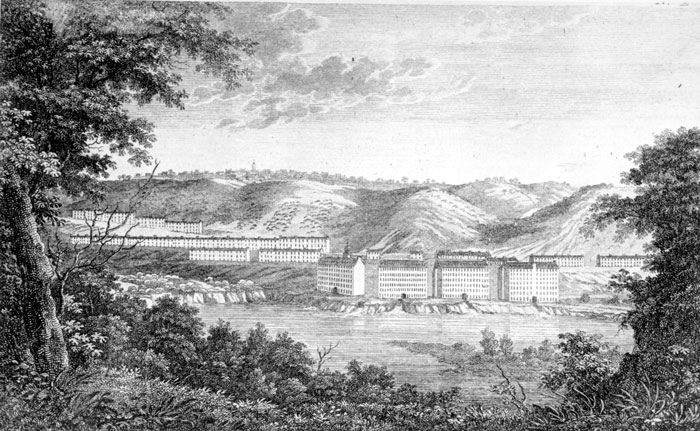 Other business and philanthropic ventures aside, it is possibly New Lanark for which Dale is best remembered. Dale was viewed as a kind and paternalistic manager by his workers, for whom he provided good quality, clean housing. In 1791, 'The Fortune', a ship sailing from Skye to North Carolina, was forced into Greenock by storms. On hearing of this, Dale sent a representative to offer employment to the would-be-migrants, which over 100 took up. The working day was long, beginning at 6am and finishing at 7pm with only half an hour for breakfast and an hour for dinner but the food provided was excellent by the standards of the day. Breakfast was as much porridge as the spinners could eat and dinner was often barley broth with 'good fresh beef, cheese or, in season, herrings and potatoes.

Dale also employed children as part of his workforce- 800 young people, including orphans or 'pauper apprentices', of a workforce of 1157 in 1793- but they were well cared for by the standards of the day. In 1796, Dale reported to the Manchester Board of Health that his dormitories accommodated 396 boys and girls: There are six sleeping apartments for them, and three children are allowed to each bed. The ceilings and walls of the apartments are whitewashed twice a year with hot lime and the floors are washed with scalding water and sand. The children sleep on wooden-bottomed beds on bed ticks filled with straw which is in general changed once a month. A sheet covers the bed ticks and above that there are one or two pairs of blankets and a bed cover as the season requires. The bedrooms are carefully swept and the windows thrown open every morning in which state they remain through the day. Of late, cast iron beds have been introduced in place of wooden ones. The upper body clothing in use in summer both for boys and girls is entirely of cotton which, as they have spare suits to change with, are washed once a fortnight. In the winter the boys are dressed in woollen cloth and they, as well as the girls have complete dress suits for Sundays. Their linens are changed once a week. For a few months in summer both boys and girls go without shoes and stockings.

Dale introduced a structured and progressive system of education for his child workers, establishing a school which, by 1796, employed 16 teachers and instructed 507 pupils in reading, writing and arithmetic. Two part-time teachers also taught sewing and church music. Younger children attended during the day and older ones once they had completed their days work. 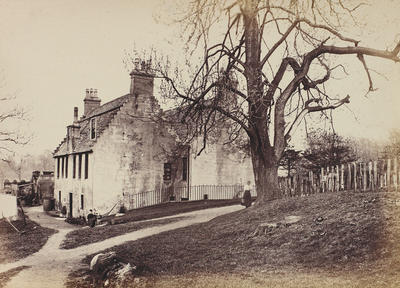 In 1800, Dale purchased the estate of Rosebank, near Cambuslang, with a view to retirement. He had begun to sell his mills, including, most importantly, the sale of New Lanark to his son-in-law, Robert Owen in 1799. Catrine followed in 1801, Spinningdale in 1804 and Dalmarnock in 1805. Dale died at Rosebank on 17th March, 1806.

The founders of New Lanark were David Dale, a Glasgow banker and entrepreneur, and Richard Arkwright, the inventor and pioneer of industrial cotton spinning. Their partnership dissolved after only a...

It was under the enlightened management of Robert Owen that New Lanark became famous. Robert Owen married David Dale’s daughter, Caroline Dale, in 1799 and in the same year formed a partnership to...

Charles and Henry Walker were the sons of John Walker, Owen's wealthy and much respected Quaker partner. Like Robert Owen, the Walkers were humanitarian employers. As members of the Society of...

On 16th May 1881, Birkmyre and Somerville, joint partners in the newly established Lanark Spinning Company, paid £20,000 for the mills. Henry Birkmyre of the Gourock Ropework Company (GRC), and his...

New Lanark Trust is a Registered Scottish Charity (SC008552) which was established in 1974 with the aim of restoring and regenerating the former cotton mill village of New Lanark as a living and...

Enjoy all our attractions & tours

Our friendly team will be happy to talk